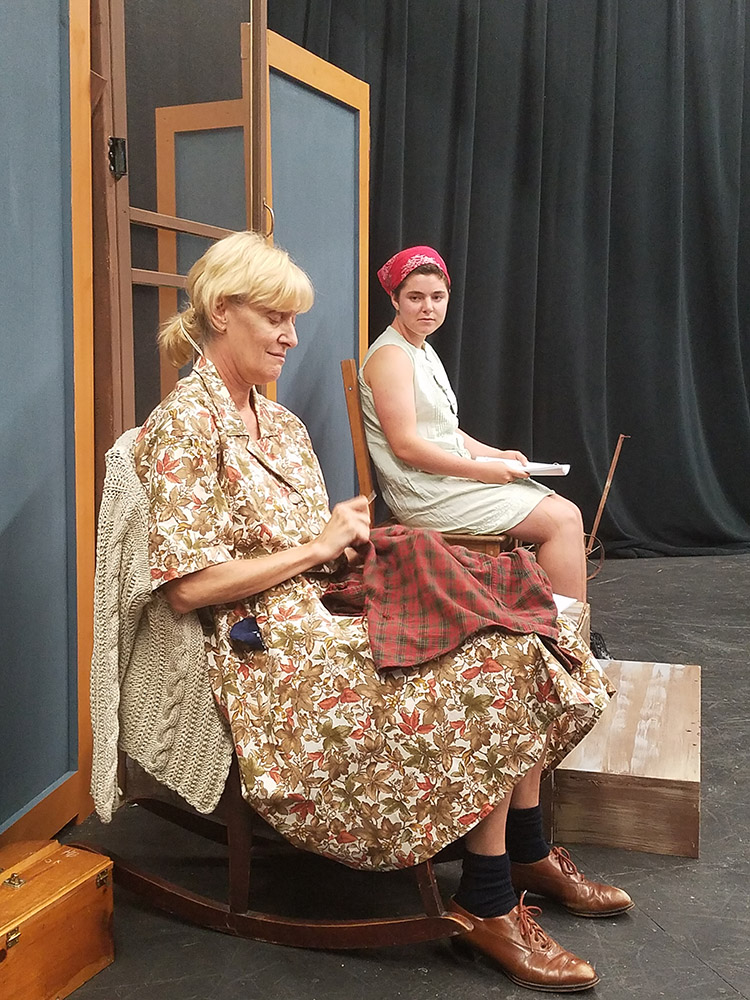 We caught up with playwright Nora Douglass (Nora) as rehearsals started in earnest for the Theater Company of Lafayette (TCL) August production of her play.

Before there was “SHORN”, there was a fourth grader who would produce and act in her plays in the basement of her parents’ home.  The kid went on to earn an MFA in playwriting and is an English teacher. Nora Douglass, a Seattle based playwright has written a beautiful love story between three unreliable storytellers in a war torn part of “anywhere” in the world.

We asked her what or who inspired her to write it?

As she states it, SHORN has a very old heart.  “It started with a question about political border and national identities; how they are changed arbitrarily by the powers that be with little regard to everyday people who are directly affected.”  She has memories of flipping through the pages of an old social studies books watching the maps of Europe change as the conflicts of The Austro-Hungarian Empire, WW I and WW II frequently changed the many areas of Europe.  She wondered what it would be like to have your identity change with each new conflict, especially when you had no say in the matter.

And thus, from her college days, SHORN came to light first as a dumb show version right after grad school.  She wrote a series of blackout scenes- “very cinematic, with no dialog with the intent of showing the changes in the relationships through a series of tableau.”  Then her lead character Lena uttered her first line after she shoots at the crow, “Crow.  For supper. Missed.”

Nora Douglass committed to finish writing SHORN two summers ago and she wrote the first complete draft from February to November 2016.  It has three characters – Lena, Claire, and August.

She sent it out to a few theaters that accept new works without an agent and it was chosen by Theater 33, a new play development workshop in Salem, Oregon, “where I participated in a three week residency during the summer  of 2017, to revise and develop the script with the help of actors, a director, designer, and a dramaturg.  Revisions were done to add not only Lena, but also Claire’s and August’s stories.

Nora’s sister said that Lena has a lot in common with their grandmother.  She did realize, that in fact that is true.  Lena hoards food and reluctantly eats it from her frugality. Lena has Nora’s grandma’s feistiness, love of secrecy and dark, her wily survivor’s sense of humor. Grandma was a child of immigrants and felt like a second-class citizen. She was a young mother during the Great Depression. “She saved everything from bits of string, and paper and cardboard, fabric and old rags- anything she thought might be useful or come handy someday- and squirreling away cash in lots of hidey holes…” “Lena’s unwillingness to let go of old habits even if they no longer serve, the outmoded survival strategies, also rings true.” Then she adds, “I can see that in me: old habits linger, even if sometimes past their need.”

According to Nora, “Claire came to me whole from the situation. She is the catalyst that starts the action.” She wanted to understand someone who is outside the community, a pariah.  She continued, “And I just thought, it is  so easy to villainize people who are caught in the wrong, or on the wrong side of a conflict; I wanted to get to know the person behind the enemy fraternizer”. Wars are created in ivory tower war rooms where generals and politicians with big maps move little pins around the represented towns and states and people as if they were pieced on a game board, and they make deals about borders and property that affect the lives of people they will never know over shots of schnapps and whiskey.”

As for a scene where Lena tells a story of how she found August, Nora states that this scene is based on her real experience.  She has a nephew who was then two years old and was in a serious car accident.  The accident affected his speech and Nora, being helpless sang to him. That memory came back to her when she wrote that part of the play.  She hastens to add that her nephew is fine now, forty and a father of two.

Nora recalls the metamorphosis of her play,  “SHORN began with the situation of ordinary people living in a contested territory, being displaced by political borders. The setting and situation both created and drove all the characters. My big question was how does endless War and conflicts over contested land resulting in constantly shifting boarder affect feelings of national identity, loyalty and patriotism? I wanted to explore the impacts on the individuals who must constantly adjust to these frequent changes that are none of their making.”

Which character in SHORN do you relate to the most and why?

She exclaimed, “Trick Question!” – She responded that she can sympathize with all three and she hopes the audience will be able to as well.  “ I learned Lena first; her story was written first and changed the least over all the drafts.  I certainly don’t have her personality or her strength, but I can relate to her resistance to change, her being stuck in the past and stubbornly unwilling to let go of habits even if she may know they are no longer serving her needs.  I don’t think I have any of Lena’s wit or her wily, irascible personality, though she was fun to write.”

“I am probably most like August – not wanting to rock the boat; sometimes willing to let other people define me based on their needs. Lena needs August to stay a little boy, and until Claire arrives to upset this fragile equilibrium, he is willing to play that role for her. I can relate to that desire to keep peace.”

As for Claire, she states, “I admire Claire’s strength and bravado, but I don’t really see myself in her. I am too obedient.”

What do you want audiences to feel when they see  SHORN?

“I hope they are moved by the story and see the love and strength and compassion behind three complex, injured, selfish and flawed characters. All three have journeys of change, though they are subtle.  I hope the audience can find sympathy for Lena even though she foes hurtful things to try to hang on to August; I hope they can see vulnerability behind Claire’s tough exterior and follow her progress from a selfish survivor  who comes to actually care for someone else.  I hope audiences can see August grow up and find agency.  And I hope they enjoy the humor, the competitive banter between the two women and childish joy August and Claire share in the scene where we discover August can speak.  I hope they stay involved in the journeys of all three of these characters and experience compassion for all of them at the end.”

The Theater Company of Lafayette (TCL) prides itself in mounting in every one of its Season original plays written by both local and out- of -state playwrights. SHORN was voted by the Board for its story, for its unique setting and circumstances and its characters, and for its message on human’s ability to adapt, survive, and to love selflessly.

SHORN is brought in part by a grant from The Lafayette Cultural Arts Commission.