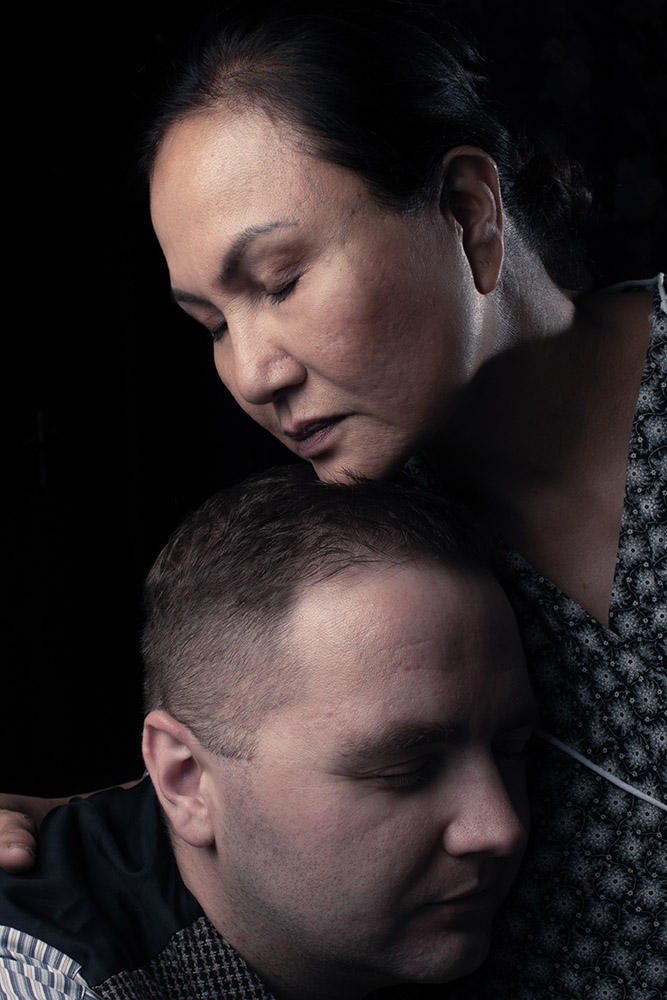 TCL concluded on August 17, 2019 its successful CO premiere of Nora Douglass’s “SHORN” – an artistic success.  Before it fades away in memory, we revisit its journey and put it away safely in the hearts of those it touched.

First, we recall things that some of our audience have posted on social media:

M. Hamto: “Awesome, you all did great. Acting was superb.

Wow – war happened everywhere. The location of the play was not revealed. It could have happened in the Philippines. The circumstances still the same. In fact, I saw so much of my Grandma in Lena. She was a young girl during WW2. She continued to hoard into her adult life. My aunts would discover Expired cans of food in her pantry.”

T. Johnson: “Very engaging performance !
Impressed with your energy and devotion to the production! Shorn was emotionally charging and provoked memories of post war habits of my parents. My mother was an Italian war bride being a teenager during Mussolini and Hitler era. She always had a large stock of canned food in our basement even when my father owned a construction company and free reign to the grocery store. Years of food lines and deprivation left lasting imprints of fear.”

J. Vogel: “Just wanted to tell you again how much we enjoyed the show. You and your fellow cast members were terrific. I teared up along with you.”

THE START OF THE JOURNEY:  In June 2019, auditions were called for the two actors to play Claire and August. Director Madge Montgomery picked Diana Quetti and Brandon Phelps as Claire and August respectively.  Munam Goodwyn was cast as Lena when Director Montgomery saw her perform in a previous production (Fermata) and decided that “Lena is found,” which the playwright approved enthusiastically.

Rehearsals began in earnest shortly after the auditions, with playwright Nora Douglass watching the rehearsals through video calls (she subsequently came to CO to see the first three performances), whereby actors were given a chance to ask her about the characters she has written about.  Ms. Montgomery created her vision for her actors, guiding them, helping them discover and be one with their character as they progressed through rehearsals. Her overall feel and ambience for Shorn were crystallized by the team made up of Maria Aki as set/scenic designer, TCL’s Tom Priestley as lights and sounds designer; Kim deJager- costumes; and Harris Armstrong-  props.  Stage Manager was Susanne Neswadi.  Production photos were taken by Charles Kelly.

As soon as SHORN was cast, TCL’s PR Director Hannah Richards and Team member Munam Goodwin worked diligently to bring Shorn out into the public’s consciousness.

BOX OFFICE APPEAL:  It is a huge bet to introduce a play that has not been heard of.  SHORN is one of those plays.  However, it has a plot that is compelling- a plot that one would rather allude to, but not dwell in.  Boulder Camera sent its photographer Jeremy Papasso to take photos during dress/tech rehearsals and Kalene McCort interviewed both the Director and Playwright.  She then wrote a feature about it on opening day, August 2, 2019.  SHORN made both the cover and full center page of the Friday Magazine/Daily Camera. TCL’s social media was abuzz and SHORN did become the “antidote to despair” – as Madge Montgomery/Director put it.  Ticket sales went up after the media blitz.

AUDIENCES RESPONDED to SHORN:  It gave them “Lena.”  As the play progressed, the actor convincingly became someone familiar.  Lena is that person who survived a war, suffered a great personal loss, went through displacement that rendered her poor and inconsequential except to her “son.”  These circumstances taught her not to trust anyone, not to show fear, to hoard and ignore her own hunger so that her son may eat.  She is as rickety as her rifle; she is highly excitable, eccentric, and cantankerous.  Yet, she showed her compassion for taking a wounded war orphan and raising him as her own. Her love for her boy August makes her jealous and protective for fear that others may harm him. She tempers his confidence by stating that he is not that special, though very special in her heart he is.  Shorn also gave its audiences Claire, the young girl who clearly wants to see August “grow up” and not be Lena’s little boy forever. She is resilient, she is rebellious, and she provides the set up for Lena to feel threatened, agitated, and be outlandishly mean to her.

It gave its audiences August, who brings eggs and tins of food to his old Lena, who recognizes that Lena saved his life. He is big and strong yet turns into a helpless bundle of a little boy with his Old Lena.  It is refreshing that SHORN’s Claire and August did not conform to the “boy meets girl – they fall in love and ride some oxen cart through the desolate potato fields into the sunset”

Indeed, Ms. Douglass has given us a powerful and a moving love story amongst three people- letting August leave to find himself, giving us a glimpse of Claire being accepted into Lena’s life, “I am not asking you to leave.”

Finally, Lena’s shack in the middle of an arid field, and the lights conveying passage of light and dark in Lena’s life, and sounds that gave the play its sparse “happy to be alive” quality were executed with effective dramatic effect. The actors were dressed reflecting their status in a society that is besieged by war, utter desolation, and hunger.

SHORN made its audiences laugh, cry, and it gave them pause. It made them remember stories told in their own family of how, so many years ago, Lena’s story sounds like the story of their own mother, or grandmother or someone they knew.

Ms. Montgomery’s direction, and her actors’ dedication, and Ms. Douglass abiding faith in this production and the strong support of the core team of designers, stage manager, PR Team, costumer, props manager, and the tech director resulted in sterling performances that left the audience wonderfully surprised.  And to top it all, paying homage to a line in the play, “…on a single can of joy?”- the audience had a chance to sample, for a nominal contribution, a slice of peach pie joy, from local bakeries Eats and Sweets and Tip Topsy Pies.

SHORN, a gem in a tiny jewel box that was Mary Miller Theater sparkled late into the night and will be etched in the memory of those who felt its heart.